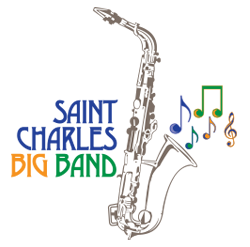 Connect on Social for the Latest Concert Updates

The Big (Jazz) Band was organized in 1999, drawing mainly on musicians from the Municipal Band, many of whom also played with other big bands in the St. Louis area. In 2000, the 18-piece Big Band began performing one Sunday evening each month during the summer in Frontier Park in St. Charles. Located on the banks of the Missouri River in Historic St. Charles, Frontier Park offers a fabulous backdrop to experience the music performed by the Big Band. The monthly Sunday evening concert series continues today.

Two indoor concerts were soon added to be played in conjunction with the 50 piece St. Charles Municipal Concert Band. The joint Spring and Holiday Concerts are held at Lindenwood University’s performance centers in St. Charles.

The Big (Jazz) Band responded to requests and was soon playing for civic and private events in the Greater St. Louis Community. These performances include wedding receptions, country club dances, dinner dances, Friday Night Senior dances, and church picnics. Many of the inquiries that were received expressed an interest in a smaller band to fit the small venues available. In early 2014, a 10 piece dance band was formed using the principal musicians from the Big Band.

We invite you to come and experience the Big Band at one of our upcoming performances!