Connect on Social for the Latest Concert Updates 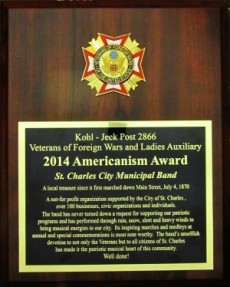 The St Charles Municipal Band was awarded the 2014 Americanism Award by the Kohl – Jeck Post 2866 Veterans of Foreign Wars and Ladies Auxiliary last evening. Members of the Band’s board of directors were on hand to accept the award. The award recognizes the Band’s commitment and support of our veterans and our community.

The Award Plaque reads as follows:

St. Charles City Municipal Band
A local treasure since it first marched down Main Street, July 4, 1870
A not-for-profit organization supported by the City of St Charles,
over 100 businesses, civic organizations and individuals.
The band has never turned down a request for supporting our patriotic
programs and has performed throught rain, snow, sleet and heavy winds to
bring musical energies to our city. Its inspiring marches and medleys at
annual and special commemorations is most note worthy. The band’s unselfish
devotion to not only the Veterans but to all citizens of St Charles
has made it the patriotic musical heart of this community.
Well done!